The Therapeutic Potential of Peptides 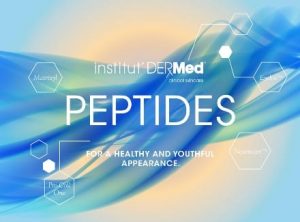 Peptides are at the heart of efficient age targeting cosmetic products. Peptides have a direct effect on influencing collagen production which correlates to a healthy and youthful appearance with smoother skin and reduced wrinkles.

What is a Peptide?

In simple terms peptides are constructed from various combination chains of amino acids. These amino acid chains occur naturally in the body and serve as the building blocks for protein. One important protein in our skin is collagen. Peptides play a key role in skin health, everything from wound healing to skin regeneration and maintenance.

Peptide cosmeceutical preparations fall into three major categories: carrier peptides, signal peptides, and neurotransmitter peptides. The first peptides in this arena were labeled carrier peptides as they were introduced into the pharmaceutical world to assist in enhancing wound healing. The first commercialized carrier peptide delivered copper, necessary for wound healing, into the wounded tissue. Later this peptide was adapted and commercialized in facial cosmeceuticals to minimize the appearance of fine lines and wrinkles.

Signal peptides are designed to create a biologic response. The first commercialized signal peptide was palmitoyl pentapeptide known commercially as Matrixyl. This is still one of the most widely used peptides in facial cosmeceuticals. Matrixyl appears to down-regulate the production of collagenase thereby increasing dermal collagen.

Neurotransmitter peptides were developed to attempt to act in a way that is similar to botulinum toxin. Acetyl hexapeptide-3 is the most widely commercialized neurotransmitter peptide of this type and is thought to help induce muscle relaxation thereby softening the appearance of lines and wrinkles.

There are many types of peptides but for skin care the most exciting are collagen stimulating peptides. Matrixyl (palmitoyl-pentapeptide 3) found in the Institut’ DERMed Enhancing Eye Cream Complex, is a peptide known to have a specific effect on collagen synthesis and skin repair. Because of this it qualifies for use as a long-term age targeting ingredient. Also incorporated into the formula is Eyeliss™ a patented peptide, that helps to reduce puffiness and bags under the eyes, and Haloxyl™ matrix-derived peptides often used in cosmetic fillers like Restylane to smooth out wrinkles. These powerhouse peptides reinforce firmness, tone the eye area and lessen the appearance of under eye dark circles.

Almost as popular as Matrixyl are the copper peptides. Copper peptides are shown to help reduce redness and irritation. The Institut’ DERMed Bio Derm Nutri Gel (professional use only) is formulated with copper peptides; it is the most researched peptide in the market today for improving the skin’s capacity to heal.

Palmitoyl Oligopeptide –{ a string of up to 20 amino acids} is a relatively new addition to the list of peptides currently in use in skin care. Some experts believe that the chains of amino acids communicate with the skin’s collagen and boost its production, which is a major factor in achieving smooth, wrinkle-free skin. Institut’ DERMed Enhancing Hydra Lip Serum is formulated with Palmitoyl Oligopeptide which helps to make it a lip line enhancing powerhouse.

Hexanoyl Dipeptide-3 Norleucine Acetate found in the Institut’ DERMed Lactic+ Peel is an encapsulated peptide that helps to break the bonds between dead cells at the surface of the skin, so it speeds up the rate of skin cell renewal.

One of the newest collagen stimulating Peptides is called Pro-Coll One. The Institut’ DERMed Anti-Oxidant Lifting Peptide Serum is formulated with this powerful peptide that appears to have a targeted efficacy on collagen synthesis.

Neutrazen™ (Palmitoyl Tripeptide-8) is a multifunctional active that calms and soothes the skin. The Institut’ DERMed Soothing Mask is formulated with this Tripeptide to soothe the skin. Perhaps one of the most incredible benefits of this ingredient is its ability to return the complexion to a more resilient state which helps to build a higher sensitivity threshold in sensitive skin.

All peptides exist in limited amounts in nature so research and lab re-production is an on-going exciting field as the market for peptides continues to grow steadily. The development of specific and targeted uses of these potent ingredients to guard against disease and illness is also projected to increase. In the lab new peptides are being discovered all the time along with more enhanced delivery systems.